Slightly set back from Corso Garibaldi, the Basilica of San Simpliciano is a lovely, ancient church, a vast structure that creates an atmosphere of peace within interiors that have remained much the same for about 1,700 years. It is a significant sight on a Milan walking tour

The church of San Simpliciano is one of the four basilicas planned and built by Ambrose, bishop of Milan from 374 to 397 A.D. Rather than being dedicated to single saints, these churches were named after categories of saints, namely prophets, apostles, martyrs, and virgins. San Simpliciano was the “basilica verginum” and so dedicated to Mary and all the Holy Virgins. It probably dates back to the 4th century, and later it acquired its Romanesque form during rebuilding work between the 11th and 13th centuries. A lovely Renaissance-style cloister was added in the 15th century, and Ambrogio Bergognone painted the Coronation of the Virgin in the apse.

Your Friend in Milan will show you how the passage of time can be seen in the exterior architecture, with some large ashlar blocks at the base of the walls dating back to the late 4th century, the soaring Romanesque walls and arches, and the Renaissance cloister.

The Coronation of the Virgin by Ambrogio da Fossano, also known as Bergognone, was painted in 1508, and it reveals some influence of Leonardo da Vinci in the chiaroscuro, particularly in the face of Christ, and the attention to detail typical of Flemish painters that can be seen in the drapery. But he also retained some of the characteristics of Medieval painting, such as the differing sizes of the figures according to their importance.

The central scene of God the Father, Christ and the Virgin is surrounded by rings of angels that probably reflect the structure of heaven as envisaged by Dante in Paradiso (Divine Comedy). The nine rings of angels correspond both to the nine spheres of heaven, and in turn to the nine rings of angels contained in the ninth sphere or Primum Mobile. The bright, distinctive colours of the composition are a reference to the Empyrean, the highest heaven, permeated by fire and where the blessed are so divine that they are made of pure light. Further out, the angels form a choir of singers and musicians, all separated so that the men are on the left and the women are on the right. Many figures are shown with enough detail to reveal their identity, and they include saints, prophets, martyrs, virgins, Dante himself, perhaps Beatrice exactly opposite, and possibly a self-portrait of Bergognone. 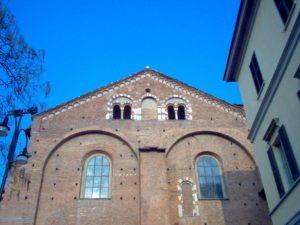